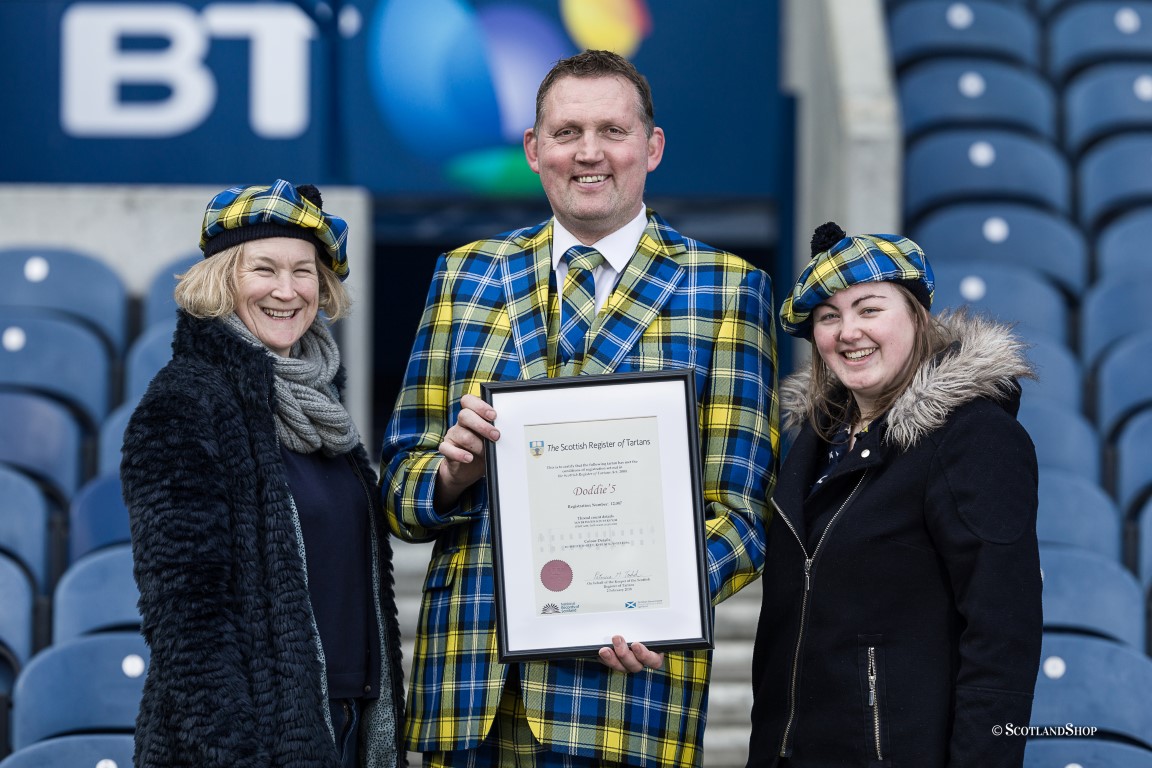 Doddie Weir OBE is certainly a household name, and just as famous is his love for wearing tartan suits! So much so that a specially commissioned tartan was designed for his Motor Neurone Disease research charity, the My Name’5 Doddie Foundation, in 2018.

The tartan was designed by Doddie in collaboration with Emily Redman, a designer for Berwickshire-based clothes firm ScotlandShop, in a bid to raise cash for his charity.

Former Jedburgh Grammar pupil Emily, who lives in Duns and is employed as the Marketing Manager for ScotlandShop, started her further education career at Borders College studying Art and Design in 2008, before progressing to Heriot-Watt University and graduating as a Textiles Designer. During her time at Borders College Emily, as Students’ Association Vice President, met Princess Anne at the official opening of the new campus in Galashiels.

Talking about her time at Borders College, Emily said:

“At the age of 15 I wanted to leave school and eventually progress to university, so the Borders College course was the perfect fit. Being at college first then moving to university made the transition so much easier.

“It was the ideal route to getting a place at university and I was really lucky to make so many great friends during my time at college and then university.”

Using specialist software – ScotCad – Emily worked closely with Doddie to develop a number of tartan concepts, before eventually settling for the Doddie tartan we all know and love. The finalised tartan is registered at the Scottish Register of Tartans, which is part of the National Records of Scotland. 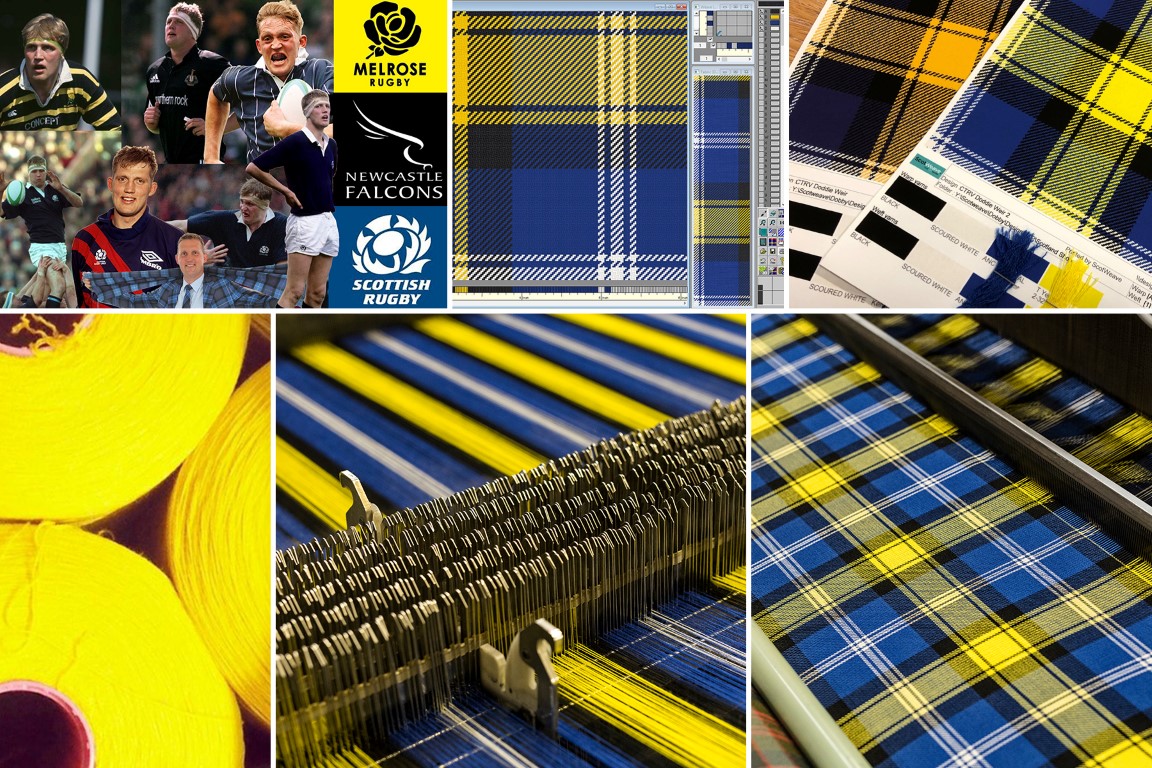 The first outing of the woven tartan saw it tailored into a suit in time for the launch of the Calcutta Cup in 2018.

Talking about her time working with Doddie when she was developing the tartan, or at corporate events, Emily commented:

“Working with Doddie is such a pleasure. He is such a great entertainer and always makes you laugh.

“And if you’re not driving, he is usually keen to get you to sample another one of his products – Doddie gin.”

A former Scottish rugby union player, who played as a lock and made 61 international appearances for the Scotland national team, in 2018 Doddie was made an Honorary Fellow of Borders College at the annual Graduation Ceremony. 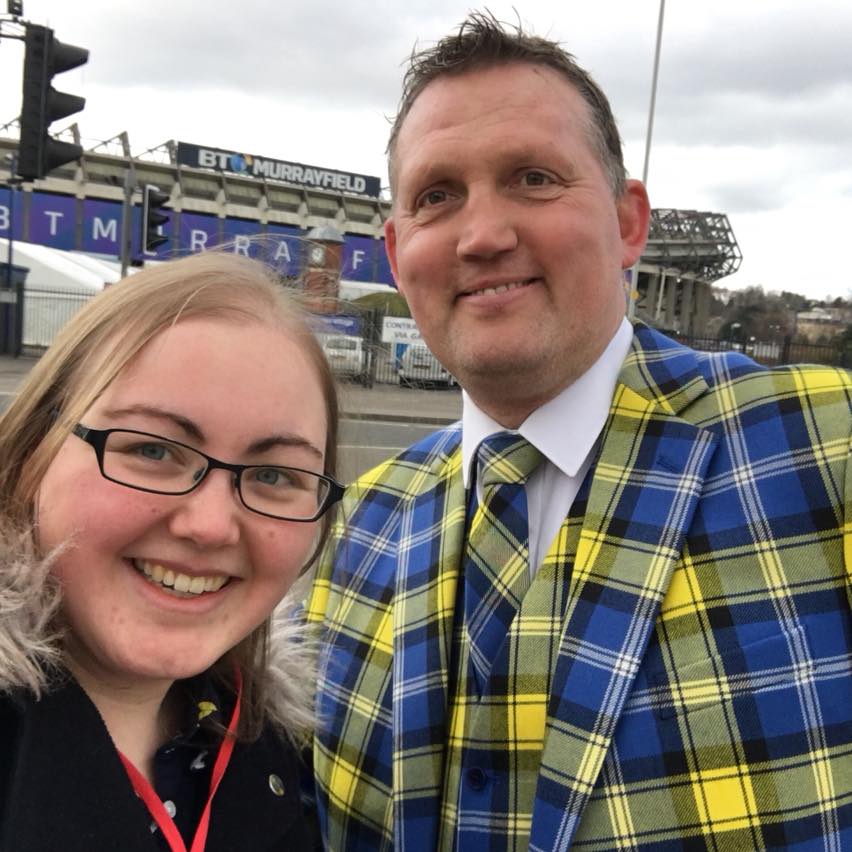 Doddie Weir is one of Scottish rugby’s most loved personalities, with his strong sense of fun and a proven track record of success for country, club and nation. In June 2017, before heading out to support the British Lions in New Zealand, Doddie revealed was suffering from Motor Neurone Disease (MND). MND is a rare and, as yet, incurable condition that deeply affects the brain and nerves. Doddie founded the My Name’5 Doddie Foundation, committed to helping fellow sufferers raise funds to aid research and make a difference to the lives of those coping and battling with MND.

To date, the Doddie Tartan has appeared on buses, cars, boats, lorries and even a tractor. To view the range of merchandise available to the public, please visit the ScotlandShop website here.

Designing the Doddie Tartan is certainly one of the more high-profile jobs that Emily has worked on during her career, and at Borders College, we are certainly proud of what this former student has achieved.

Thank you to 'Photography by Jonathon Fowler' for the use of the main image above.

Please follow the link below to find out more.