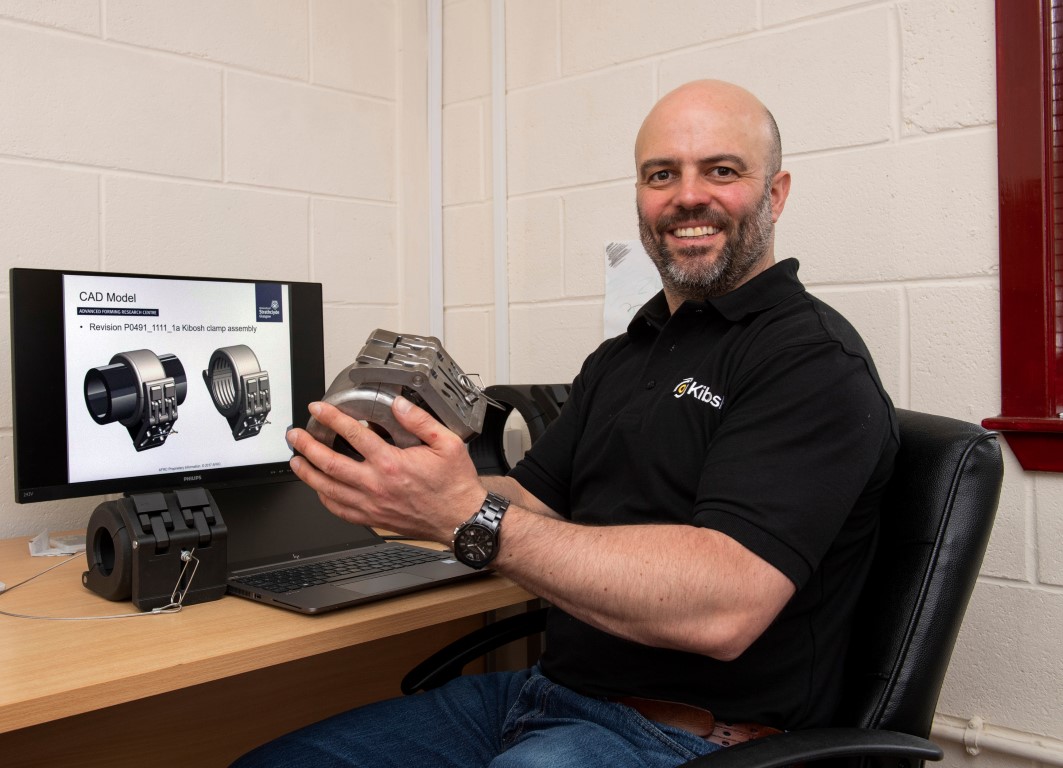 Former Plumbing student Ross Dickinson, who completed his training with the College back in 2004, has secured the backing of OGTC and some of the world’s biggest energy sector companies to develop his unique pipe repair solutions for industrial applications both onshore and in the harshest offshore operating environments.

Ross, who lives in Walkerburn, set up Kibosh Ltd, which has patented a range of clamps that can mend damaged pipes within seconds. Kibosh secured funding from OGTC, the Aberdeen-based technology centre that helps the oil and gas industry develop and deploy innovative solutions that will accelerate the transition to an affordable net-zero North Sea. This support, alongside that of its existing investors, will fund pre-field trial testing and certification by BSI, the leading global product standards assessor, and qualification of its industrial product range by Lloyds Register.

Ross Dickinson, a self-employed plumber based in the Scottish Borders, created Kibosh’s signature pipe repair technology 14 years ago to provide a quick – but highly effective and robust – fix for damaged or leaking domestic water pipes. Dickinson, who left school aged 16 with no qualifications, was diagnosed with dyslexia years later and prescribed with coloured glasses that helped him to read. He soon gained his plumbing qualifications at Borders College and won a SNIPEF apprentice of the year award, before starting his own plumbing business in 2007.

Having spent several years developing and patenting his unique solution, Kibosh’s clamps have gained an international customer base in the professional plumbing, trades and DIY sectors over the last few years. In February this year, when freezing conditions in Texas saw houses across the US state suffer burst pipes, Kibosh supplied several thousand clamps to assist the recovery effort, including sales via major American DIY retailers Home Depot and Lowe’s Home Improvement. Kibosh has sold more than 100,000 domestic clamps so far, retailing on average between £12 and £20 each, with a growing trade customer base and an estimated market potential of £200m in the retail sector alone.

There are significant ESG (Environmental, Social, and Governance) benefits to the Kibosh technology, which quickly, easily and affordably stops leaks and fugitive emissions, allowing pipe systems to keep functioning at full capacity and production levels, thus saving energy. Avoiding loss of containment also avoids waste, pollution and potentially expensive clean-up operations, so lowering the carbon footprint of industry on many levels. The firm’s range of high-efficiency rapid freezing clamps use up to 50% less gas than other solutions to form and maintain an isolating ice plug within pipes, which speeds up maintenance and negates the need to drain entire systems.

These qualities have led to growing interest in Kibosh from the oil and gas, energy, and industrial sectors, with globally renowned partners including Total, Harbour Energy, CNOOC International, and Hydratight recognising the huge potential of the firm’s clamps as quick, simple solutions to damaged pipes, minimising any operational downtime until a permanent repair can be made.

To meet that demand, Dickinson has created a range of industrial clamps which are now entering the final phase of research and development, with field trials due to take place in the North Sea over the next 18 months. This project will also be supported by University of Strathclyde’s Advanced Forming Research Centre (AFRC), part of the National Manufacturing Institute Scotland.

“It’s been excruciatingly difficult to get to this point, but it’s great now to be working with some of the biggest names in the energy sector to develop Kibosh products for a range of industrial settings. I knew pretty early in the process that if we could make the clamps effective for domestic use, we had a really good chance of applying the same basic solution in large-scale engineering and manufacturing environments.

“I’m confident that in working with OGTC and the University of Strathclyde over the next year or so we will be able to develop a range of Kibosh products that will save vast amounts of time, money, and crucially water and other precious fluids for companies in many different sectors over years to come. We believe our solutions have the potential to make a positive contribution to the net-zero journey and because these clamps have such huge potential for cross-sector compatibility in oil and gas and other industries we believe the market potential is in the billions of pounds range and, most importantly, can help save the planet and industry a similar amount too. I’m passionate about this and about doing it here in Scotland, using as many local partners as possible along the way.”

Dickinson had the idea for Kibosh’s pipe repair technology when he was called out to attend to a burst pipe at a house in Melrose during the winter of 2007. The homeowner could not find the shut-off valve to turn off the water supply and by the time Dickinson was able to do so, several thousand pounds worth of damage had already been done to the property. The self-employed plumber asked himself why there wasn’t a product available on the market that would have enabled him to bring the leak under control quickly, minimising any damage and buying time for a permanent repair to be carried out.

That was the ‘Eureka moment’ for Kibosh pipe clamps and Dickinson developed the idea during his spare time over the next few years, working with Cademuir Engineering in Selkirk to produce a prototype in 2010. In 2012, the Kibosh Emergency Pipe Repair Clamp caught the attention of Rothenberger, a leading global plumbing tool and equipment brand, and Dickinson soon entered into an agreement that saw his clamps produced and distributed internationally under the Rothenberger brand as well as the Kibosh one.

In 2015, Dickinson secured funding to start the first phase of developing an industrial solution with the Oil & Gas Innovation Centre (OGIC) and Heriot Watt University. Three years later, he secured further funding for a second phase of development of Kibosh clamps for pipes up to six-inch diameter, working with OGIC again and AFRC.

In September 2019, Dickinson secured private equity funding from Edinburgh-based investment syndicate Par Equity, and the Scottish Investment Bank, which allowed him to focus on Kibosh full-time and to appoint a small team to help him grow the business, including chairman Keith Gibson, non-executive investment director Audrey Orhorn, and former Procter & Gamble executive Andy Peterson, who joined Kibosh as chief executive in July 2020.

“Kibosh is already a real Scottish success story, but it is also one that I believe is only just beginning and has immense potential. Ross has had to sacrifice so much and overcome a great many obstacles to get to where we are today and the success to date is testament to his creativity, determination, and perseverance.

“This is a hugely exciting period for Kibosh, working with some major global industrial leaders to develop Ross’s unique technology in ways that will facilitate significant improvements in the efficiency of assets and aid the transition to a net-zero future.”

“Two years ago, we made our first investment in Kibosh, to support the roll out of Ross’ invention, a patented pipe repair and pipe freezing devices with proven global application and potential. Since then, we have worked together to further strengthen the team with the addition of Andy Peterson, with a background as a global executive with P&G. Ross, Andy and the wider Kibosh team are now aiming their patented technology towards more industrial scale applications with massive commercial opportunity solving key industry pipe maintenance and leak issues. Kibosh remains one of the most exciting businesses in Par’s portfolio.”

“OGTC are delighted to be supporting the team at Kibosh with further development of their rapid pipe repair and pipe freezing clamp systems. As we continue to invest in our drive towards a net-zero UK carbon strategy, Kibosh’s innovative repair and freezing products align with our strategic technology roadmap. We’re looking forward to working on this exciting project with Ross and the team.”

“AFRC’s Design Engineering Team, part of the National Manufacturing Institute Scotland, are excited to work with Kibosh and other partners to bring the Kibosh rapid pipe repair and high efficiency pipe freezing products closer to market for oil and gas and industrial applications. Having already supported Kibosh in the conceptual development phase, it’s fantastic to get an opportunity to support again in the next phase. We look forward to providing engineering design, materials, manufacturing, verification and validation support to Kibosh in developing advanced prototypes, drawing on over 140 years of combined industry experience within our team.”