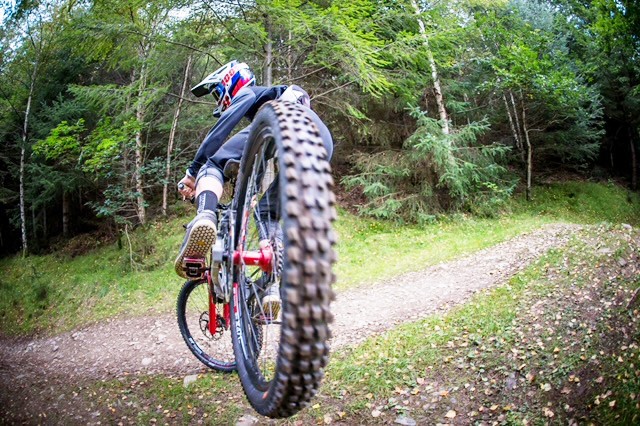 Denholm mountain biker William Brodie has his fingers crossed that restrictions ease in the coming months so that he can compete at a junior level in top quality World Cup events throughout the rest of the calendar year.

The former Denholm Primary School and Jedburgh Grammar School pupil is now studying at Borders College and has been training as hard as he can – within the rules of the current climate – to get ready for what could be a busy and exciting time later in 2021.

“I am old enough to race now in the junior level of World Cup events,” William, the 16-year-old who left high school after S4 last summer, told The Hawick Paper.

“At the moment the first one is due to be in Maribor in Slovenia towards the end of April.

“Obviously, it all depends on the restrictions, but if I was able to get out there and compete and be involved in other World Cup events after that one then I would be up against some of the best riders aged under-18 around.

“It is the highest level you can go to as a junior in downhill mountain biking so it will definitely be a challenge, but one that I am looking forward to having not competed in a long time.

“After Maribor, the next meet for downhill is due to be in Fort William in the Highlands and obviously I can’t wait to compete again having raced there quite a few times before.”

Being part of the BASE (Borders Academy of Sport Excellence) Mountain Biking programme has helped William a lot in recent months. The programme allows students to gain a number of qualifications whilst developing their mountain biking skills and William added:

“I have really enjoyed it so far.

“Obviously the last few months have been different than what a normal year at college might be like, but it has given me more time to get out on my bike and focus on particular things.

“I knew a few people who are on the course from before because I have competed against them, but the course is so big and well respected now that people come from lots of different places to be a part of it and there are folk from down south, Ireland and Spain involved for example.

“When I have been getting out on my bike recently on my own it has mostly been around Denholm, Jedburgh and Hawick while I have been going up to Innerleithen twice a week with the course.

“We have been doing two days a week online of late when it comes to classroom-type studies so there is a good balance and that has been interesting too, learning about the psychology of sport and things like that.

“I do three strength gym sessions a week and I do two other fitness sessions a week. These are done at the Think Fitness 4 Less gym in Hawick in ‘normal’ times, but for now, I have set-up a makeshift gym in the house so that I don’t miss out on anything.

“Ever since I was young I have just loved the speed and excitement of mountain biking and I want to see how far I can take it.”

Article and photograph credited to The Hawick Paper.