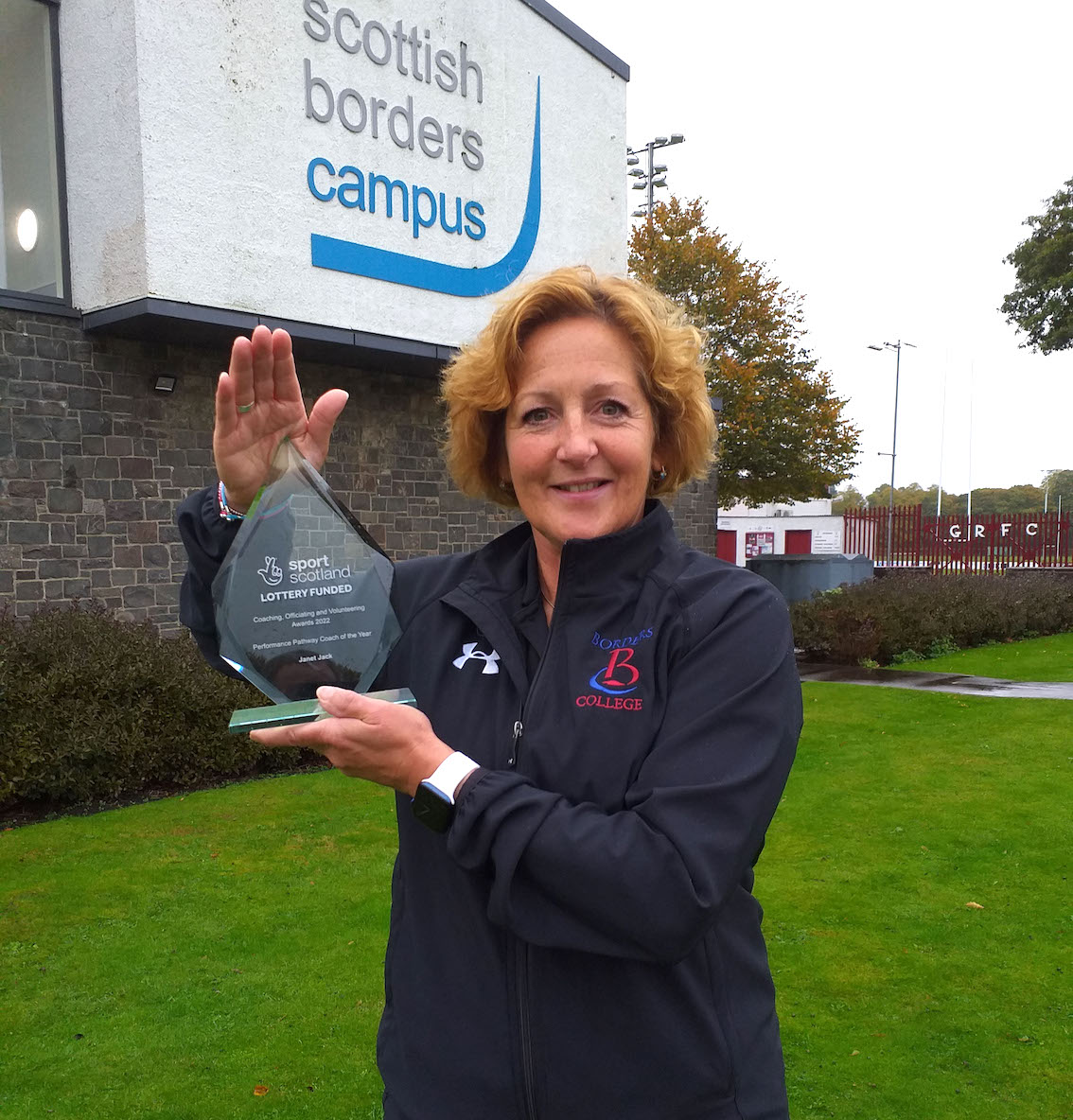 Borders College Lecturer Janet Jack has been recognised for her contribution to developing sporting talent in the Borders after being awarded Performance Pathway Coach of the Year at the 2022 sportscotland Coaching, Officiating and Volunteering (COV) Awards.

The Awards celebrate all those who break down barriers, inspire and enhance the lives of others through sport, and recognise the commitment of those who apply their own time and effort to make sport accessible to all.

Janet, from Ancrum, was nominated by Live Borders Hockey Development Officer Sarah Glendinning and was delighted to be announced as a winner at the recent Awards Ceremony, held at Glasgow City Chambers.

Commenting on her achievement, Janet said:

“I am honoured to have been awarded Performance Pathway Coach of the Year at the sportscotland COV Awards. I am privileged to work with some of the most incredible young players and performers in the Scottish Borders and passing on my experience and knowledge to the younger generation is something I love doing.

“For me, it’s not just about the coaching aspect, but ensuring we have an inclusive and safe environment and adding value to the experience of every player.”

Janet worked for Borders College between 1989 and 1996 before a spell with Edinburgh College. She returned to Borders College in 2015, where she has continued to pass on her enthusiasm and passion for sport, as well as her expertise, to many students.

“My passion for coaching is something I take into my lessons at Borders College. I believe in developing a good performance pathway and encouraging students to adopt a good attitude, value and respect, and support each other. Having those values helps develop individuals as a whole.”

A former Scotland and Great Britain international player, Janet is the head coach for the Fjordhus Reivers Hockey Club, the largest hockey club in the Scottish Borders, and regularly coaches regional squads at all age levels.

Janet works tirelessly on the performance pathway within her club and across the Scottish Borders, looking to inspire and develop aspiring and emerging young players.

The dedicated coach also runs a future squad for under-14s – another additional weekly session that helps enthusiastic and ambitious hockey players develop their skills and offers one-to-one sessions for players who are in the regional academies.

As well as coaching, Janet still plays on a regular basis with Fjordhus Reivers and recently returned from a trip to South Africa, where she captained the Women O55s Masters squad in the Masters World Cup.